History of the potato 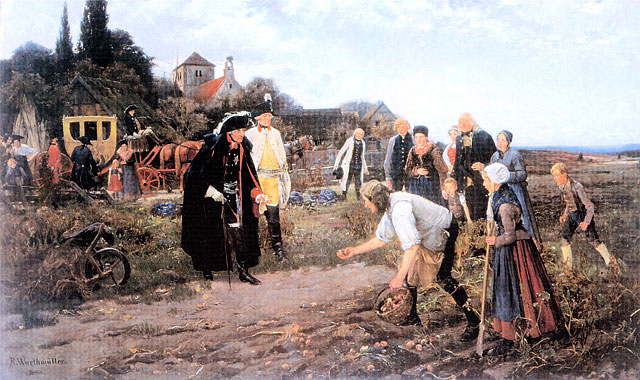 The evolution of “Potatoes”

The Incas called potatoes “papas”, which translates as “tubers”. The first tubers were discovered in the Andes mountains, roughly in the area of what is today Peru and Bolivia. The cultivation of the tuber in that region, in hundreds upon hundreds of varieties, is documented as far back as 7000 years BC. In those days, though, potatoes did not taste the same as today. However, the Incas found out that high up in the Andes (3000 - 4000 metres), where the traditional corn would no longer grow, they could still achieve usable yields with potatoes. On its journey to Europe, it is likely that the Italians gave the potato the epithet “truffle”, in Italian: “tartufoli”. In German, the name developed via “Tartuffeln”, “Artuffel”, “Artoffel” and finally to “Kartoffeln”. In the end, the botanist Caspar Bauhin called the tuber “solanum tuberosum esculentum”, which translates as “edible, tuberous nightshade”.

The proliferation of Potatoes

Around the middle of the 16th century, the potato came to Europe via Spain and England. Due to its blossom, however, the potato was originally identified as an ornamental plant rather than an agricultural crop. The introduction of the potato changed the world substantially, as many seafarers in particular realised that with potatoes, they had an extremely nutrient-rich, easily storable, and healthy foodstuff on board.

How the potato came to Germany

It is surprising that the potato became a “staple food for the people” in Germany, considering the great resistance among the population against “spuds”. This development can be attributed to Frederic the Second of Prussia (1712 - 1786), who recognised the significance of the potato in times of a constantly growing population and several famines. Nevertheless, the people were skeptical about potatoes. The reason for that was certainly the missing “instructions for use”, as many of the potatoes were tried either raw or not fully ripe, and also the unwanted substances, which today have been bred out, did not let the Prussians develop a taste for them. Another problem was the farming method; until then, it was customary to leave such a field lying fallow every three years, and now these potatoes were supposed to be grown in that third year. Therefore, Frederic the Second of Prussia resorted to a trick. In 1740, he piqued the farmers’ curiosity by planting potato fields in Berlin, which he had then guarded by soldiers to keep away thieves. Soon, this caused the farmers to grow the royal tubers, which were secretly stolen, themselves; this prevented a famine in Prussia after 1740 until after the Seven Year War 1756-1763 and ultimately was the breakthrough for the potatoes.

Today, everyone is aware of the enormous significance of potatoes. There are 5000 cultivated varieties that are grown in 130 countries worldwide. The exception are tropical, humid countries, where the climate does not lend itself for growing potatoes. It might come as a surprise that in China, more people eat potatoes than rice. Globally, the tuber ranks third on the list of most produced foodstuffs - behind wheat and rice.